A recent OSFAC and OGF training mission to Ingende District in Equateur has raised questions regarding palm oil expansion in DRC. While scoping training locations, the team visited a palm oil plantation located in Boteka village. The palm oil concession is owned by Feronia PHC - a Canadian company with three plantations in DRC with plans to expand to almost 108,000 hectares. The Boteka plantation is active and as of June 2013, it has 3,418 hectares under palm oil production. CDC, The UK government’s development finance institution, has invested $18.1 million dollars in Feronia.

The Moabi team added the location of Boteka plantation to an historical agriculture plantation map obtained from the DRC Ministry of Environment (MECNT). In collaboration with the World Resources Institute (WRI), the MECNT is validating this map, which will illustrate plantations that the government plans to reactivate with new investment.

With vast tracks of tropical forest straddling the equator, an abundance of freshwater, and a favorable climate, DRC could follow Indonesia and become a major exporter of palm oil. Questions remain, however, on when and where this expansion will occur as well as the potential impacts the industry could pose to DRC’s rich biodiversity and its rural communities, particularly indigenous peoples.

Boteka not found on the historical plantation map

Boteka overlaps with a logging concession

To estimate where the Boteka plantation may expand, scientists at OSFAC drew a 33,000 hectare buffer around the concession - approximately one third of Feronia’s stated concession area in DRC. The buffer area overlaps with 23,674 hectares of primary forest, 4,267 hectares of secondary forest and 251 hectares of savannah. 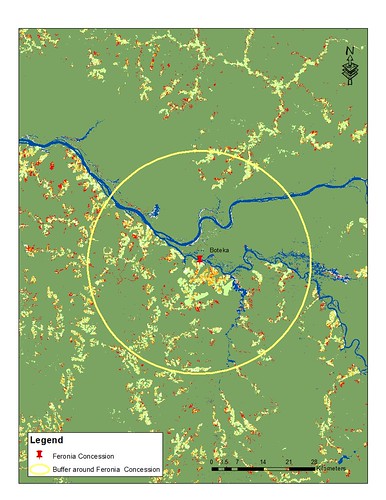 There is also evidence that between 2006 and 2012 , substantial forest loss occurred in and around the Feronia PHC concession area. Detailed analysis of satellite images suggest that the loss was caused by clearance of historical palm plantations not primary rainforest. The Moabi team contacted Feronia PHC plantation with these findings, and they will release a environmental and social impact assessment with further details on their activities in Boteka and their other plantations in DRC in late June 2014.

Click on a layer to add it to the map