3rd Edition of the Moabi Newsletter 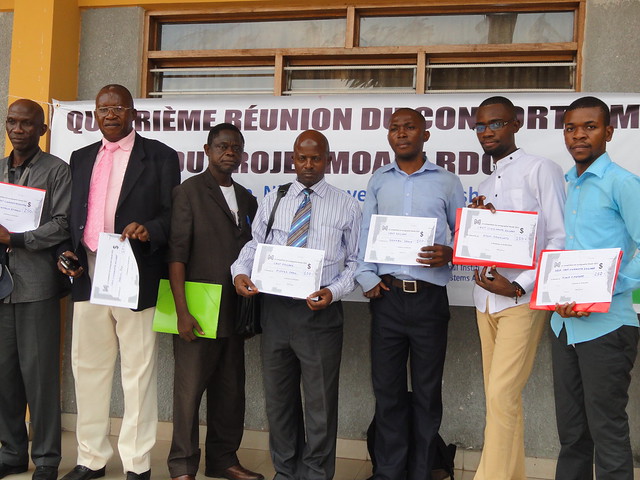 The fourth meeting of the Consortium took place in the hall of the Arche at Clinique Ngaliema in Kinshasa, on 25 February 2015. About eighty participants heard of the progress made over the last six months by the Moabi Project.

In addition, the consortium was marked by three major announcements:

The results of the 1st edition of the mapping competition were announced at the Consortium Project, February 25, 2015.

The contest brought together 44 Congolese participants ! 7 maps were hand-drawn and 37 maps were made using GIS software. The maps will be soon available on the Moabi platform in the section blog post: http://rdc.moabi.org/blog/en/.

Identity of the GIS contest winners and theme of their maps

The launch of the next edition of the mapping competition will be held on Tuesday 31 March. We will send you the terms of reference of the new edition. We invite all the Congolese experts or not to prepare for the competition. We particularly encourage all women to apply as there were too few in the last edition!!

Launch of the Funding Facility

The role of the Funding Facility is to involve civil society in collecting data on REDD+ implementation and monitoring. It is implemented by Professor Raymond LUMBUENAMO but administratively and financially run by OGF.

A regional and international experts committee is currently being created to finalize the terms of reference of this funding facility, examine the received projects and monitor their implementation. A grant of up to $ 10,000 will be awarded to each of the 5 best projects we will receive.

Deadlines of the Funding Facility :

The Moabi training sessions are organized on a monthly basis at the OSFAC office. They are designed with the view to develop a system of data collection and sharing, about REDD+ issues and the management of natural resources. These sessions are specifically designed to:

To date, 5 sessions were provided to 21 CSOs and 19 reports have been published! They are available on the following link: http://rdc.moabi.org/reports/fr/.

We invite interested CSOs in publishing their reports to make themselves known so they can take part in the training!

Since the launch of its 2nd phase in July 2013, the Moabi project has conducted several field missions, ranging from the identification of local observers to data collection on REDD + activities and compliance with national Environmental and Social Safeguards.

The overall aim of this first technical report is to enhance the collected data.

The specific objectives are to:

This is a FLAG (Field Legality Advisory Group) project funded by EFI (European Forest Institute). The aim is to explore the synergies and the complementarities between Independent Monitoring (IM) of the REDD+ and FLEG processes to ensure the transparent implementation of the forest law and the respect for the REDD+ standards in the DRC.

The specific objectives are to :

Beside, a joint IM methodology of these two processes would help achieve economies of scale and thus maximize the available resources for the IM implementation.

Over the past four years, Moabi has developed partnerships to collect a large amount of data on the drivers of deforestation. Furthermore, Moabi has been contributing to the design of an IM-REDD method. As part of the national REDD+ strategy, Moabi is now recognized as a critical tool for improving governance in the DRC. Given that the current funding from NORAD is coming to an end in December 2015, a new phase of the project is being designed.

It is in this context that at the last Consortium BOTTRILL Leo, Director of Moabi project, announced the creation of the international NGO MOABI.INC headquartered in Washington. It will specifically dedicate to the general administration of the NGO’s activities, the development of technology (Moabi platform, smart phones, etc.) and communication activities with the international partners.

A local branch will be created in the DRC responsible for the deployment of operational activities, such as monitoring grievances (which is a mechanism that must be implemented as part of REDD +).