After sending the 1st Newsletter edition whose purpose was to introduce the Moabi Project, this new edition gives you an overview of new activities carried out during the six (6) last months: you will find the progress made in the design of the REDD+ Independent Monitoring system at the project scale, the development of the Moabi platform and the launch of the Moabi map competition as well!

Hoping that the summer break has gone well, we wish you a very good reading of this newsletter and please contact us if you have any questions or comments.

The Moabi Project aims to design an institutional and a technical process of an IM-REDD and grievance mechanism for REDD+ (IM-REDD) at the national and project scale.

The goals of IM-REDD+ are for:

Thus, each REDD+ stakeholder (Congolese Administration, civil society, donors, Project Managers) are linked to the IMREDD system and will take advantage from this mechanism.

April 2014: Establishment of a Working Group to support the design of the IM-REDD system at the Project scale

This Working Group (WG) is composed with experts from OGF, ERA-WWC, civil society (GTCR, BioCongo), the Congolese Administration, international NGOs and CNREDD. Together, these partners are discussing the requirements for a pilot Independent Monitoring program at the project scale of ERA-WWC, in Mai Ndombe.

During the first meeting, the objectives were: (I) defining what the IM-REDD is, its purpose and the challenges to implementation; (II) Presenting the 2014 goals and steps towards the design an IM-REDD system ; (III) introducing the investigation methodology carried out in the field by OGF to establish a network of local Observers (LO) of REDD; (IV) Preparing the next field missions and meetings of the working group.

This first meeting of the working group provided the opportunity to share the same understanding of the issues related to the design of an IM-REDD system. In addition, the Working Group validated the objectives to be achieved in 2014, including the establishment of a network of local observers, the topics addressed during the investigations and carried out on the ground.

The next meeting of the working group will be organized in the last quarter of 2014 and will focus on training local observers.

May 2014: First edition of the REDD+ University in Bandundu and launching of an IM-REDD reflection at the Maï Ndombe district scale 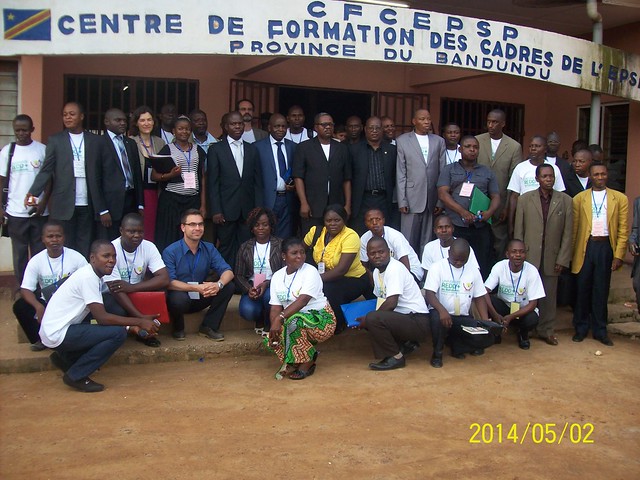 The first session of the REDD+ University in Bandundu was held from 28 April to 2 May, 2014. Organized by EFI (European Forest Institute), the MECNT and the Gouvernorat of Bandundu. The objective was to provide a REDD+ overview to provincial stakeholders.

At the meeting, Moabi Project presented plans for an experimental IM-REDD system at the projects scale. We also facilitated a working group on implementing IM-REDD+ at the Mai Ndombe district scale.

The working group suggested to work as follows:

The Working Group suggested to address this second priority according to the following steps:

**The project is tracking the design of REDD+ program in Mai Ndombe and we will participate in the workshop for the launch of this program. **

June 2014: end of the scoping field missions in Maï Ndombe : the Local Observers network is established

The second scoping mission of OGF in the ERA-WWC project area had as objectives:

At the end of this mission, six (6) new local observers have been identified and are added to the ten (10) selected previously during the first mission. 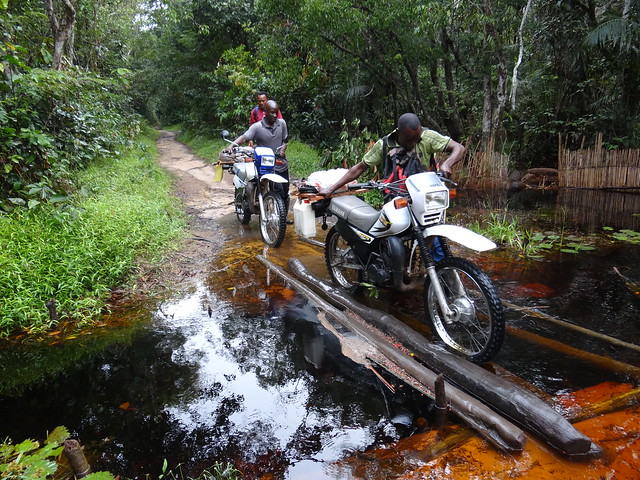 In addition, the field surveys permitted to collect the following evidences :

The next field mission planned in late October will aim to train Local Observers to monitor of the REDD+ project activities and will hire a Coordinator, based in Inongo, who will be in charge of checking the data collected by LO and in then forward to the Moabi Platform.

July 2014: A partnership agreement written by ERA-WWC and the Moabi Project

After several weeks of discussion, a formal partnership agreement between ERA-WWC Project and our Project has been jointly written. The objective of this agreement is to share REDD+ information – a key step towards the transparency required of all REDD+ projects operating in DRC.

After the signing of this agreement, ERA-WWC would be the first REDD+ project that displays its data on the Moabi Platform, especially (i) the summary of its project and the timeline of its socioeconomic and environmental activities as well (ii) its geo referenced data (village, geophysical data, vegetation data, Land use, etc.).

The signing of this partnership agreement will facilitate the implementation of Project Monitoring. Well done to ERA-WWC !

Since April, the Moabi platform has developed considerably. While increasing the number of datasets tracked, we have also greatly streamlined the editing process, making it far easier to analyze and update the data. A more streamlined design should improve site accessibility and importantly decrease site load times. We’ve made improvements to the report editor functions, upgraded the site cartography, and posted a range of new map layers including including intact forests, palm oil suitability, and updates for oil blocks and mining concessions.

In the coming months, we will be launching a the Moabi mobile app, a peer review feature, and a Maindombe data hub featuring all REDD+ project information for the Maindombe jurisdictional REDD+ program.

First Trainings on the use of the Moabi Platform! 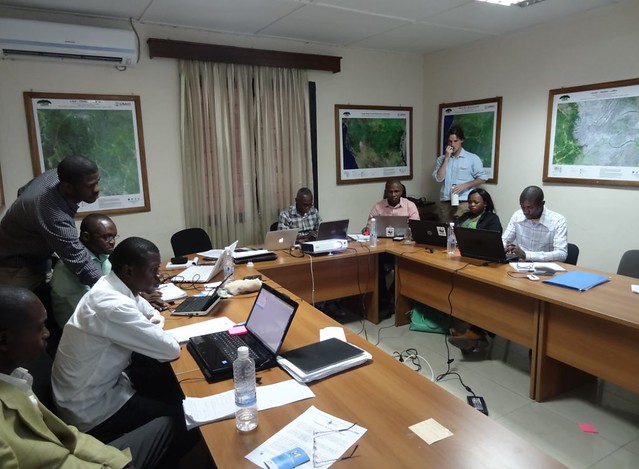 The Moabi platform is aiming to become an collaborative platform dedicated to independent monitoring for REDD+ and other land users in DRC. With this goal, Moabi project organized five days of training on the use of Moabi Platform. This training took place in the offices of OSFAC from 21 -25 July, 2014.

The first three days were focused on the use of Moabi Platform and the editing of online reports. The last two days dealt with GIS data management. These training sessions were designed for a GIS community.

At the end of this week, 45 persons were trained!

Now on, each month, a working session will be organized in small groups at OSFAC office to strengthen the role the Moabi platform can play supporting Environmental civil society and to enhance their activities by publishing brief reports on natural resource management. 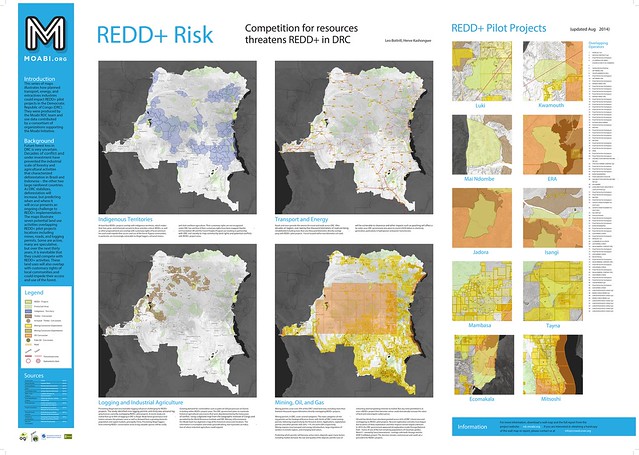 On 27 June 2014, OSFAC organized the second meeting of the working group dedicated to the REDD+ Potential risks map. The objectives of this meeting were:

Even though the formalization of partnership agreement remain complicated to implement, the representatives of the data providers have fully contributed to update the information of the REDD+ Potential risk map and they have listed the institutions, NGOs, projects and private companies that work on REDD+.

Around hundred partners have been identified. The project has already started the dissemination of the poster.

The Funding Facility: a fund for supporting the Congolese CSO

This fund, created in 2014, aimed at financially supporting the CSO that want to conduct independent monitoring activities related to REDD+.

After drafting a concept note that clarifies the rules for applying to this fund, the Moabi Project will establish a panel of experts in charge of selecting the projects as well as the monitoring their implementation.

This panel will be composed with experts from national and international environmental civil society, Congolese Administration and donors.

The objective is to make available this fund by the end of 2014.

Launch of the Moabi Map Competition

The Project has launched its mapping competition! 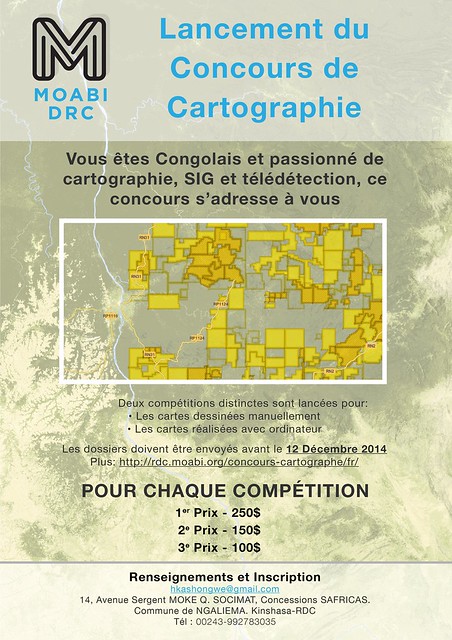 The goal is to encourage natural resource mapping, to improve our knowledge on DRC environmental issues that people face.

All Congolese Nationals living in DRC can apply to the competition! Two categories of price have been allocated: one for hand drawn maps and the other for GIS/remote sensing maps (1st prize: $250, 2nd prize: $150 , 3th prize: 100 $).

You can find all the competition details on the Moabi platform or by emailing Hervé Kashongwé : hkashongwe@gmail.com

Do not last: this competition is open until 12 December 2014!

Moabi gratefully acknowledges the support of the Government of Norway through a grant administered by the Norwegian Agency for Development Cooperation (Norad). The views expressed herein are not intended to reflect the policy views of either of these entities or their affiliates. Editorial team: Leo Bottrill, Serge Bondo Kayembe, Hervé Kashongwe & Benoit Thuaire Contact details : Benoit Thuaire +0 (0243) 8-21-30-33-70 benoit.thuaire@gmail.com